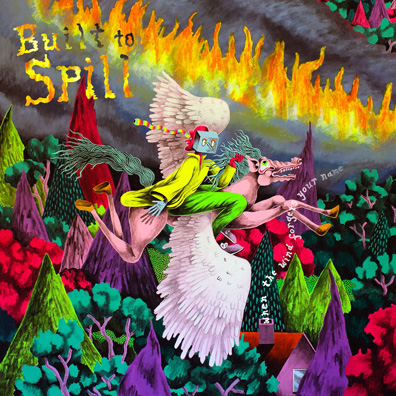 When the Wind Forgets Your Name

By Matt the Raven

The past 30 years have seen Doug Martsch and his Built to Spill collaborators as a band that never conforms to the whims of the time but rather as established purveyors of dependable album-oriented guitar rock with a complex character and stylistic dynamics. The new album, When the Wind Forgets Your Name, is another polished gem that sounds distinctly Built To Spill yet refreshingly unfamiliar.

Recorded and mixed in 2020 with Brazilian tourmates Le Almeida and João Casaes (both of the psychedelic jazz rock band Oruã), the nine tracks skim across genres—as the artists pick up clues from each—and are spun together with purring, resonating guitar textures while settling into a groove of nuanced, earnest rock that sounds both peculiar and venturesome. Martsch has never been one to write the perfect pop song, but his improved songwriting skills are combined with his ability to coax precise, spectacular sounding guitar riffs and aesthetically layered guitar swells which he artfully interweaves into a classic rock foundation. The tracks are cleverly decorated with shadowy effects and/or imaginative passages while staying grounded by the steady rhythms and slick bass lines.

With Martsch’s nondescript, everyman voice—perhaps an acquired taste for some—the amiable melodies may sound similar to the undiscerning ear, but his singing is never overbearing and fits the shifting musical styles seamlessly, while the songs soon distinguish themselves in differing ways, often revealing an understated transcendence after repeated plays.

Standout tracks such as “Elements,” “Rock Steady,” and “Never Alright” prove Martsch isn’t too old to let loose on occasion, with bits of refined high energy boosts brought to life via expressive guitar playing. Elsewhere, “Spiderweb” and the lengthy “Comes A Day” each mesmerizes with a unique blend of faster-paced, slap-happy beats while the melodies and short guitar riffs add smarts and sass.

With When the Wind Forgets Your Name, Built to Spill prove they have the staying power to remain atop the indie rock heap. In ways similar to R.E.M., Eels, and Bright Eyes, their knack for harnessing a whimsical energy combined with tight, interlocking little nuggets of sound and various fragments from diverse styles and genres is put to use to create something entirely different that is exciting and fresh, yet comfortably dependable. (www.builttospill.com)

Ways to Stream & Pre-Order the Series On Blu-Ray – Billboard