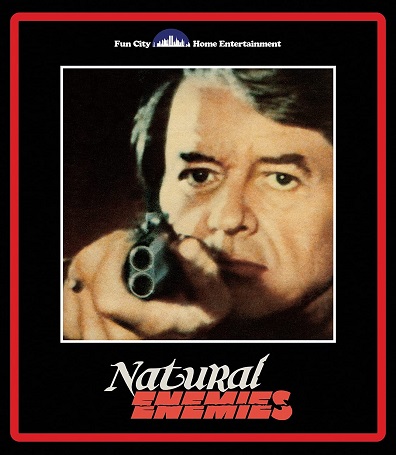 Sitting by his bedroom window as the sun rises, Paul Steward loads his Marlin .22 rifle. Shortly after 8 p.m. this evening, Paul has decided that he’ll walk downstairs and shoot his family as they sit around the dinner: first his wife, then the three children, and then himself. It’s something he’s been fantasizing about for weeks.

This is the night he’ll finally do it.

With about as bleak a premise as one could build a film around, Jeff Kanew’s Natural Enemies (1979)—based on a novel by Julius Horwitz—threatens this horrifying ending with its opening lines. From there, it lets its audience stew in the apprehension they suddenly feel as 48-year-old Paul (played by Hal Holbrook) has a near-silent breakfast with his family and then catches the train from his Fairfield County home into New York City for a not-so-typical day on the job. Realizing that everything he’ll experience today will be for the last time, he puts on his best face as he goes about the tedium of running his magazine—offset by experiences he’d like to indulge in once before taking his own life, such as an afternoon orgy with five high-ticket hookers.

Along the way, we’re given narrative flashbacks to provide insight—Paul’s insight, at least—as to what led him to make this grim decision. He’s allowed his misery to gradually mount over nearly two decades, but his latest troubles have been compounded by his wife’s semi-recent breakdown on top of many of the more common factors which would lead to a more run-of-the-mill midlife crisis. (Paul’s wife is played by Louise Fletcher.) As the day continues and the clock ticks down toward Paul’s promised dinnertime massacre, he’s given ample opportunity to contemplate his decision—not only internally, but with many of the people he interacts with over the day. As Paul runs a scientific magazine with an inclination towards philosophy, a rotation of great thinkers are paraded through his office: a psychotherapist, an Auschwitz survivor, an astronaut in the throes of his own existential crisis. Each allows him to speak to his current predicament, if not openly then in code. Natural Enemies may lean a bit too heavily into this conceit—even Paul’s hookers offer commentary on his problems—but it’s a testament to Kanew’s direction and Holbrook’s performance that it so rarely feels far-fetched. Holbrook, in particular, makes Paul intentionally difficult to read, leaving the viewer to nervously wonder the whole time whether Paul’s murder scheme is a stress-driven flight of fancy—or an inexorable guarantee.

As it mentions prior to the film, Fun City Editions’ Natural Enemies Blu-ray was sourced from a 35mm print stored by the Library of Congress; although there are a few moments where minor damage flickers on the screen, it looks very good for a movie that’s largely been unavailable since the VHS era. As we’ve come to expect from FCE, the bonus materials are quite rich: we have an in-depth video interview with Kanew; a trailer; an audio commentary from Bill Ackerman, last heard commenting on FCE’s Heartbreakers release; and a booklet essay by Jason Bailey, author of Fun City Cinema; and an alternate ending which… well, we won’t spoil anything, but certainly changes that film’s final impact.

Natural Enemies is a stressful viewing experience, with a premise that may be too troubling for many. The way it keeps its viewer wondering “will he, could he…?” from the first shot until its ending scenes, however, makes it impossible to look away. If you’re not put off by the description alone, though, it’s well worth a look, especially for the performances by its two leads. Fun City Editions has done yet another commendable job not only rescuing a film from obscurity, but surrounding it with bonus materials from the filmmaker and knowledgeable critics that enrich it through added context. We will recommend Natural Enemies to those prepared for a very bleak viewing experience.