The Fab Fourum News Your Beacon for News
Home Featured Blu-ray Review: A Force of One [Kino Lorber] 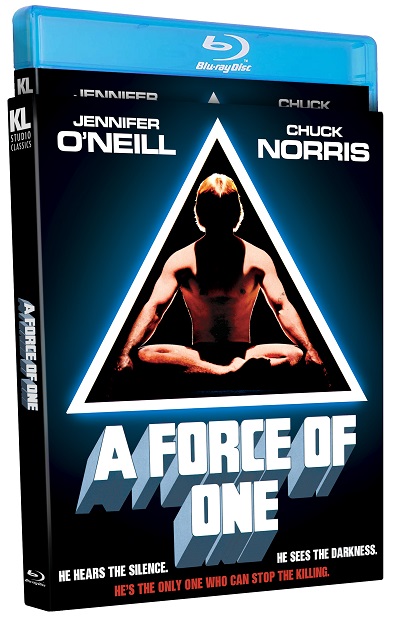 A Force of One

In Southern California, a small city police force is under siege by a local drug trafficking ring. Narcotics officers are turning up dead under mysterious circumstances, their windpipes crushed and necks broken without any trace of a murder weapon having been used. The killer clearly demonstrates an unparalleled ability to kill armed cops with their bare hands, faster than a bullet can be fired—and so the force’s eyes to the local karate scene, with a suspicion that the hired killer might hail from their ranks. In the meantime, they recruit karate champion Chuck Norris—err, Matt Logan, *played by* Chuck Norris—to help their cause by training their undercover cops to defend themselves with martial arts.

Released in 1979, A Force of One was the first really great Chuck Norris action vehicle. While the original screenplay came from writer Ernest Tidyman—of Shaft!, The French Connection, and High Plains Drifter fame—it was re-written by director Paul Aaron, who better shaped the movie to Chuck’s talents and skillset as an actor. (One of the things he did was remove the love story in favor of a fatherly bond Chuck shows to one of his students, which smartly avoided the dreaded Chuck Norris romantic scenes that dragged down too many of his movies.) The results are a movie that hides his shortcomings while playing to his strengths: the scenes where Chuck’s training the other actors are, dare we say, some of the most natural he’s ever appeared while acting. It helps that Norris essentially plays a riff on himself in the film.

Chuck’s also surrounded by a solid cast, led by Jennifer O’Neill playing an undercover cop turned Chuck’s star pupil, and the always reliable Clu Gulager as the exasperated chief. Our hero’s martial arts rival is played by karate champion Bill Wallace, providing Norris with an opponent who could believably challenge him in the arena.

Although the plot culminates a little too quickly in the messy final act, A Force of One is a pretty entertaining 90-minute thriller, with a few fantastic fights which make great, early use of Steadicam and some eerie slow motion. We would argue that A Force of One could be slotted into the upper tier of Norris’ filmography.

Kino Lorber’s special edition Blu-ray is very robust, sporting two commentaries: a new one by action experts Brandon Bentley and Mike Leeder, and an archival commentary by director Paul Aaron. There’s also a 15-minute Making Of documentary from the early-2000s DVD release, alongside a whopping ten trailers, TV spots, and radio advertisements. If you’re a Norris or martial arts movie fan looking at Kino’s latest trio of re-releases, A Force of One is where we’d recommend you start.