Björk keeps it weird on “Ovule,” the second track to be released in advance of her new album, Fossora. Björk contributed timpani and trombone arrangements and crafted the beat in tandem with sideproject, while El Guincho offered additional production.

In the accompanying video, executive produced by Kat Davey, Björk dons a series of increasingly bizarre dark red, black and metallic silver outfits as she sings about love in its many forms. She says of the song:

“ovule for me is my definition of love
it is a meditation about us as lovers walking around this world
and i imagine 2 spheres or satellites following us around
one above us that represents ideal love
one below us representing the shadows of love
and we ourselves walk around in the third sphere of real love,
where the everyday monday-morning meet-in-the-kitchen-love lives in”

Safaree’s Childhood Friend Who Robbed Him Jailed For 18 Years 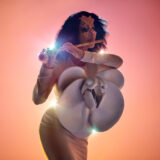 Fossora will be released on Sept. 30 through One Little Independent. It’s the follow-up to 2017’s Utopia, which was nominated for the best alternative album Grammy. Björk has been fairly active on the road this year after having not toured since 2019, and will play three shows in South America in November as part of Primavera Sound’s expansion to the region.