Eilish’s Happier Than Ever will receive its exclusive double LP release via Darkroom / Interscope as one of the few newer titles on this year’s Black Friday list. In honor of the late Grease icon Olivia Newton-John, fans can look forward to an exclusive Physical LP picture disc, while Bowie’s The Next Day will be released as an EP and his Peace On Earth/Little Drummer Boy with Bing Crosby will come out on an exclusive 12″ vinyl.

For ’60s and ’70s country-rock and psych fans, the Flying Burrito Brothers’ Live From The Bottom Line NYC 1976, Jerry Garcia’s Pure Jerry: Coliseum, Hampton, VA, and Janis Joplin & Jorma Kaukonen’s The Legendary Typewriter Tape: 6/25/64 will be pressed for the first time in celebration of the event.

The full list of titles is available on RSD’s Web site, as is a breakdown of participating stores. 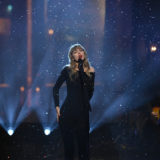