The tone for the evening was established early. Peter Murphy stormed the stage, scepter in hand, before the house lights could be dimmed. “Let’s get going,” he shouted at his bandmates. “Fuck the lights.”

The occasion was the opening night of Bauhaus’ 2022 U.S. tour — a short run of dates that sticks to the West Coast during the month of May before the post-punk icons reconvene in September for a pair of shows in New York City — and the temperamental frontman was anxious to get things underway.

Only two other members of Bauhaus — drummer Kevin Haskins and guitarist Daniel Ash — heeded Murphy’s call as they ambled through John Cale’s “Rosegarden Funeral of Sores.” The trio played for a good two minutes before bassist David J showed up. He threw his instrument on and spent the rest of the song’s running time struggling to keep pace. Which is how it felt for the rest of us watching: jumbled, tense, riveting.

The entire set played out like a high-wire act by a band with a notorious history of inner tensions and bad blood as each of the four men on stage at Portland’s Arlene Schnitzer Concert Hall on Tuesday night seemed to prod the others toward disorder. The first few songs were a muddle of frantic tempos and, on “In Fear of Fear,” a song from the band’s 1981 album Mask, squalling saxophone noises from Ash and a pecked out synth melody from Murphy. They didn’t appear close to cohesion.

It took a more restrained moment in the setlist for the gears to lock into place. “The Spy In The Cab,” a paranoid vision from Bauhaus’ debut full-length In The Flat Field, set them right as Murphy rested on the drum riser to croon about unseen mechanized eyes while the rest of the band held firm to the insinuating pulse of Haskins’ electronic drum pads. 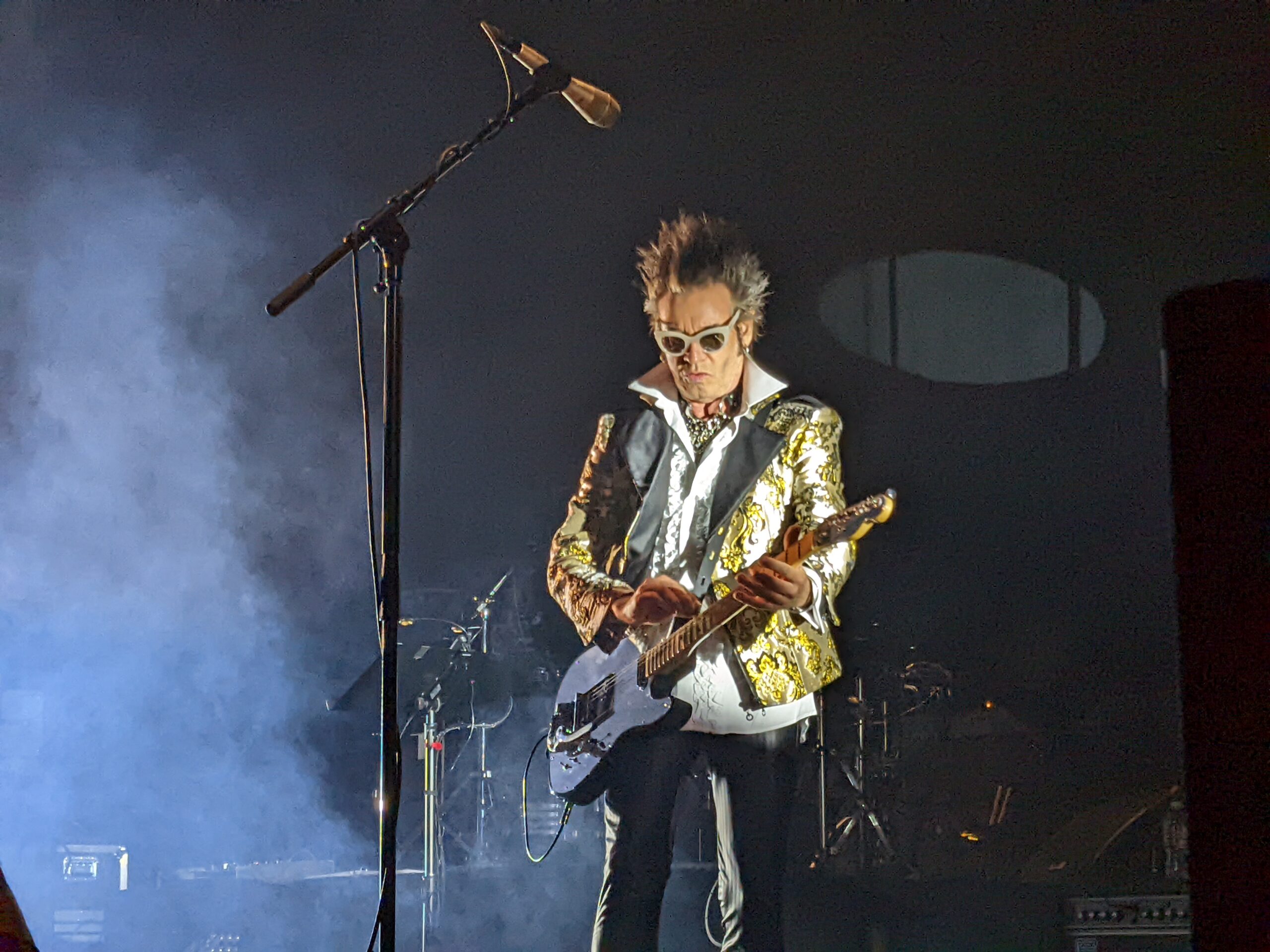 From that point, the quartet harnessed their frantic energy and shot straight through the rest of the set with rigor and bite. It felt like a blur, wrapped up in just over an hour and leaving the audience reeling by the time the group finished tearing through their wicked take on Bowie’s “Ziggy Stardust.” They left almost no time for Murphy to banter or for anyone in the band to take in the zeal of their hungry fans.

Great as it often was, because of the speed with which Bauhaus undertook this set, the moments that stood out were either surprising or bilious. And they were almost all generated by Murphy.

With his baldpate, white beard, and leather jacket covered in small mirrors, Murphy led the night like a spangled necromancer — curled fingers and jutting arm movements and vicious stares. There was no denying his presence, particularly when he stood on a platform behind Haskins’ drum kit, bathed in red light, and used the mic stand as a makeshift crucifix during “Stigmata Martyr” or flung a handful of rose petals aloft during “Bela Lugosi’s Dead.” He also proved to be a utility player, taking up a melodica and some percussion to anchor the dubbier sequences of “She’s In Parties” and warping Haskins’ steady drum pattern on “Bela” out of proportion with an Echoplex.

But there was no way to ignore Murphy’s frustration. As the band brought the goth-disco groove of “Kick In The Eye” to life, he marched to the wings to audibly upbraid a member of the crew. And as that same song was hitting its peak, he angrily brought it to a close, staring down Haskins and growling out, “I’m not fucking doing that again” and threatening to remove “Silent Hedges” from the setlist.

If it bothered the other three members of Bauhaus, they didn’t show it, tucked as they were behind dark shades and a veil of British reserve. Or perhaps they’ve just come to expect some element of turbulence from their unpredictable leader. It does leave this writer, at least, wondering what the pull was to reunite for this tour. They’ve released one new song in the past 15 years and have never offered a PR-ready quote about settling unfinished business as a band. From the pace of the often-great set and the thread of agitation running through it all, the night took on an atmosphere of a contractual obligation — less like fan service and more like community service.

The Roots, Haim, and Sheryl Crow Announced for The Big Climate Thing Festival