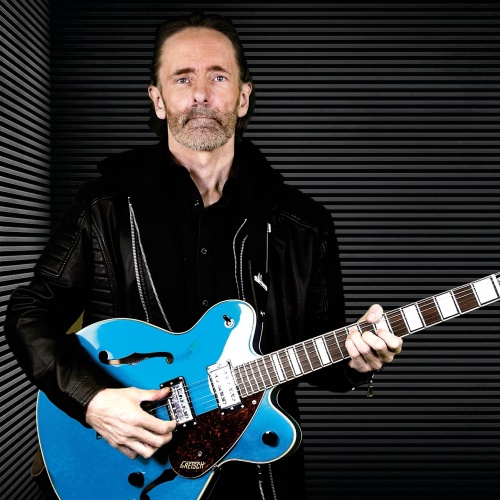 We are excited to share our interview with Barry Alexander King, an experienced and talented indie pop/rock artist who has just released his new fantastic album BAK3. Music-News had the amazing opportunity to chat with Barry about the record, his career, and what’s next…

Tell us about Barry Alexander King – When did you first start writing and playing music?

Playing, basically when I came out of college. I had always performed at college concerts but was a late starter as regards to serious live performance. My first memorable experiences were when I met a guy on a Interrail trip around Europe and we ended up busking together for 3 months in the Greek islands. You could say I learnt the ropes on that trip and how to feel comfortable in front of live audiences that don’t know who you are. Later there were bands and eventually in 2018 I decided to try my luck as a solo artist. As for writing that came quite a while later. I believe most artists & singers start with other people‘s material to learn their craft and I was no different. Playing cover songs which fit your style helps you develop your own writing later on. The writing is really a lot of trail and error. I mistakenly thought I was a good writer 20 years ago but only now I realise that I was merely at the beginning. In the meantime I feel pretty confident as a writer but always feel I can write another better song.

How would you describe your music and your musical influences?

My music could be described as Indie Pop/Rock but I do push the boundaries in that respect. My first album had a definite country rock element to it probably because of the musicians I was and am still working with. Even household names sometime sound like variety acts and why should I be any different as a not so well known artist?. If I go to a concert I would want to hear plenty of up tempo songs but the ocassional ballad breaks things up and gives concert goers most likely more all round satisfying concert experience. That’s how I envisage my future live shows. I mean look at Metallica, probably one of their most famous songs „Nothing Else Matter“ is a ballad. The point being there is no particular reason to put your self in particular fixed musical sets of genres although the music industry definately propogates this practice. Obviously there are limits for me here too as I wouldn’t expect to be put on a RAP playlist!

Musically I feel some of my biggest influences were bands like Daryl Hall & John Oates, Crowded House, David Bowie, The Beatles (who wasn’t !) But some of the newer generation of Singer Songwriters like Jason Mraz & Matt Nathanson have also been a big influence. I remember listening to Matt’s „Some Mad Hope“ album back around 2008 and that really grabbed me. I believe that also influenced me to try my luck as a Singer Songwriter. As a kind of thanks to Matt I even recorded one of his songs „Heartbreak World“for my current album BAK3.

You just digitally released the remaining 4-songs for your new album, BAK 3. Congratulations! Tell us all about the 9-song album. What inspired it? Where was it recorded? What’s the theme? What was the decision behind releasing a few songs at a time, rather than all 9 songs at once?

Thanks guys! It was definately a labour of love with some real challenges to over come. To begin with it’s always my intention to go one better than the previous album and I try to find topics to write about which perhaps are not so over used in Rock & Pop music. It doesn’t mean that I won’t write about love or personal relationships but let’s just say it has been done a million times.

The first track Facetune_Autotune for example is song about society’s fixation with visual & sound perfection via social media. Today everthing is expected to be sqeaky clean & shiny. The lenghts people go to visually alter themselves has taken on a totally new dimension. Soundwise (And we are all definately guilty of this) needs to be quantized and tuned otherwise the newer genaration of listeners probabyl think there is something wrong with it.
Another song on the album is a „Tribute“ to all the „Keyboard Warriors“! One of the biggest negatives of the internet & social media in general is the fact that people now have a massive platform to verbally attack and insult each other.

“Try To Carry On” is all about finally being in a good place but starting to have fears of losing it all. „The Flame“ is about the early years of trying to find the right partner but intrinsically judging those partners faults for the wrong reasons & striving to find the „perfect“ partner which is impossible.

I recorded most of the album at my home which I had already done previously even before the pandemic. The BAK Band recorded their parts all in the USA (Some amazing musicians & people from Lafayette Louisanna who I found through Air Gigs/Soundbetter) . The tracks 1, 3 & 4 were produced by US based British producer Killian Cruiser. The rest I produced myself with Tony Daigle co-producing & the Band (Justin Lewis, Brian Petry and Brandon Trent) on track 5.

My first two albums I had released all at once but after following a lot of social media experts, such as Rick Barker, tipps & advice I decided on a stratergy of splitting the album into different release phases. A lot of experst advise it’s better this way as it keeps people engaged & „waiting“ and also benefits platforms like Spotify & Apple Music. Another reason was that after the pandemic subsided a wee bit it was not always easy to get my co producers to guarantee release dates as they had suddenly become extremely busy again after things opened up again

You’ve performed in a bunch of different cities and countries. Do you have a favorite place to place? How about a favorite memory from being on the road?

I think the most memeorable gigs were in some Greek style amphitheartres back in the busking days in Greece or later some US military airbases in Germany on massive stages with around 5000 people. Back in those days it was all about the overall experience of music, party & having a great time whereas today it’s all about the music and performance. I am glad I sowed my so called „wild oats“ and got drunk as it is now well and truly done & dusted.

What’s next for Barry Alexander King?

Well I will now obviously promote BAK3 as much as possible on social media as well as at Live shows/streaming here in Europe. I am also working on the possibilty of a solo tour as an opener for a more established artist for early 2023 and I am currently getting a BAK band together for next year as I feel the songs deserve it.
Aside from that I have a couple of books/scripts which are basically finished which I would love to get them into the right hands. I wrote them back in 2008/ 2012 but there were no Netflix or Amazon Prime back then so I now feel the time is right for both those projects.

What do you enjoy doing aside from playing music? Any other hobbies or passions?

Well besides the music I love to hang out with my family (wife & daughter) and I am a total tennis freak, reasonable player but better spectator & love the ATP/Grand slams. I was already at Flushing Meadow US Open, French Open and Wimbledon and only the Australian Open is missing on my list of the Grand Slams.
So far got to say the US open was by far the greatest experiece as a tennis fan. Not just the tennis but the whole atmosphere at Flushing Meadow was a blast. Met some great people and we hung out in the evenings down in Greenwich Village, Chelsea & Little Italy. Fantastic memories indeed.

How can our readers keep up with your career?

Thanks again guys was a pleasure and honour. My social media links & platforms are the best places to keep up to date with what is going on:

Inside His Journey to Latin Superstardom – Billboard

Beatles’ Revolver reissue shows band in new light: ‘This is the record where we...