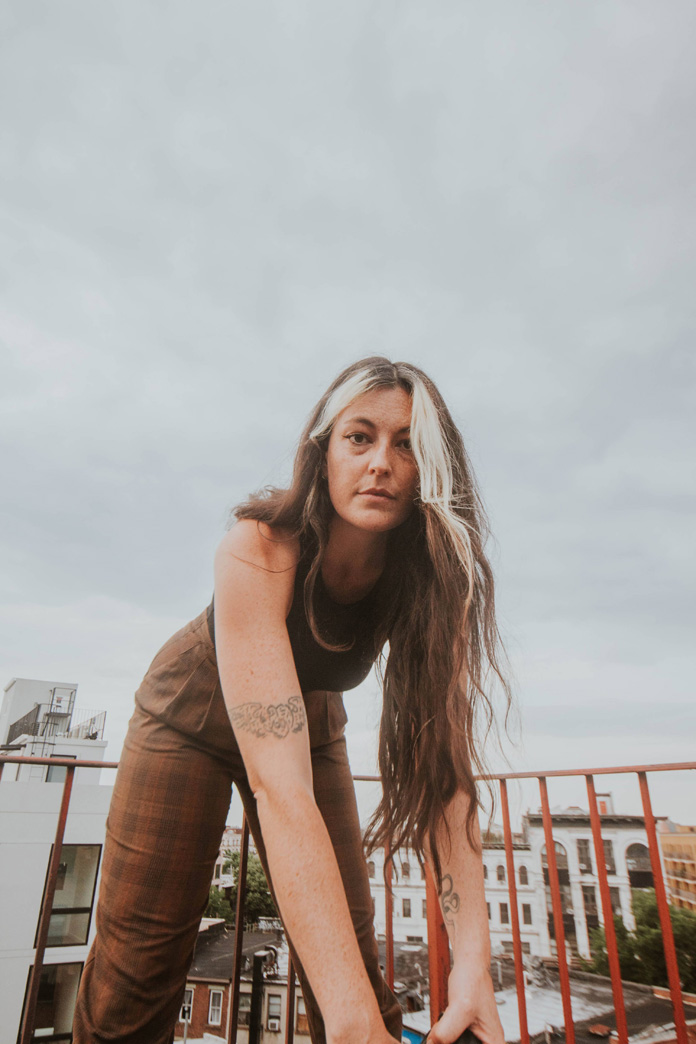 Aubrey Haddard on “Awake and Talking”

Singing to the Underworld

Aubrey Haddard’s new record begins with a bright hum, like someone just switched on the lights. A beat enters, and a chorus of Haddards drop in like bells. The sound evokes a vivid image of a tall, wide hall, lined with Grecian columns, floating somewhere in outer space. “That’s exactly what we were trying to create when we made all of the artwork. The creative director of the project said, sort of like a prayer, before we started: ‘We’re gonna create this future alien world. We’re gonna invite the aliens into our space,’” Haddard laughs. “But it was also centered around that Grecian imagery.”

Awake and Talking, the sophomore record from the New York City-based singer/songwriter, is a far cry from her 2018 debut, Blue Part. Where Blue Part was soulful and cozy with a home-spun sound, Awake and Talking is the art-pop answer to late-aughts indie rock like The Temper Trap. During the pandemic, Haddard, like many, turned to stories of the past. She started reading into Greek mythology, and it seemed to crop up everywhere as Haddard and her band were working on the record.

“I think some of it had to do with feeling pretty desperate and confused and searching for meaning. I’m not a religious person, so that wasn’t something that I could really lean on—saying ‘everything happens for a reason’ while we’re going through all this heartbreak and grief was not an option for me,” she says. “It’s just not something that resonates with me. But the idea that we have these old stories of human suffering to give, maybe not meaning, but some sort of reverence for the experience itself, was really helpful.”

Pulling heavily from the myth of Orpheus and Eurydice, specifically the 1950 film Orphée directed by Jean Cocteau, Haddard and her bandmates created a sound that feels both futuristic and in line with the past’s dream of the future. “[Cocteau] brings [the myth] into this wacky, 1950s French film noir adaptation, and the aesthetic of it is so juicy. I’ve always loved the feeling of experiencing that story that way, and I thought that it would be cool to try my own hand at it,” Haddard says of the film. Of the character himself, she says, “Orpheus is the musician and the creator. During the time when we wrote the record, I was feeling lost and confused because my outlet of performing wasn’t there anymore. [Orpheus] was the spiritual idea of the muse being in you and being as close to divinity as you can get in that way.”

Across the record, Haddard sings of parallels and mirrors, doors and walls. Her husky but powerful voice soars over gentle beds of guitar, sometimes buoyed by crashing drums and other times by quietly pulsing beats. “I’ve always liked the idea that a mirror could be something more than you think it is. Reflecting on yourself is always more than you think it is, too,” Haddard says. In the music video for the propulsive, synth-driven “Future Boxes,” reflections act as portals. Haddard sings in a black and white world, a labyrinthine house where the glassy surface of a cup of tea transports the viewer to a different room and a different Haddard, mirrors are windows, and windows are pools of water. “With that illusion of all the mirrors and the many reflections of me, it was mimicking the corridors of the underworld, and you have the duality between the earthly world and the underworld.”

It’s this sublimation of art and literature that inspires Haddard the most. Prior to moving to New York, she worked for an art gallery at MIT, watching the contemporary collections change across several years. “I would read and write all day, sitting in the gallery and experiencing this art over and over,” she says. “Contemporary visual artists are always making the craziest statements about life. Or maybe it’s a simple statement, but doing it in such a weird, confusing, inspiring way that you’re like, ‘Oh, maybe I can make this weirder than I thought and really push the boundary here.’ And then being in the gallery, you see how everyone else is interacting with the art, so you’re immediately affected by the other human experiences.”

Above all, it’s humanity that drives Haddard’s art—the humanity inside an experience, the humanity inside a myth. Awake and Talking is a record that finds its speaker probing for humanity in dark corners and endless spaces. It also poses a challenge to the listener and to Haddard herself: “I want to steal something from my friend. She says every day she tries to answer the question, ‘Are you who you think you are?’ I feel like I confronted my past, I confronted my present, and I’m questioning my future on this record. And I’m trying to answer that question.”

“Everybody has a little bit of good and evil in them”