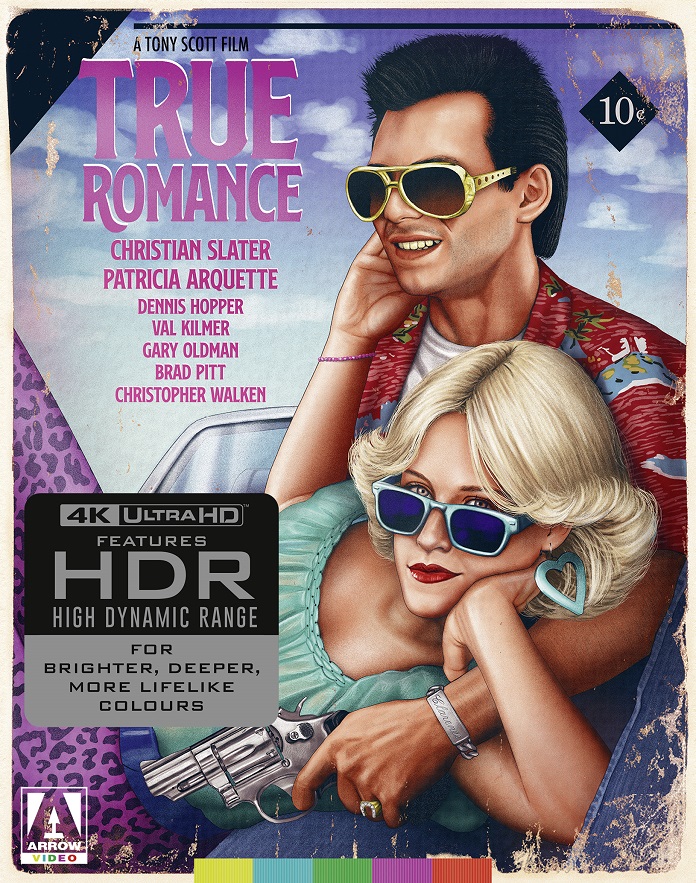 Marc Anthony at the FTX Arena on November 18th

The star-studded 1993 romantic thriller, True Romance, gets an ultra-deluxe home video release just ahead of its 20th anniversary, giving movie fans a chance to experience this marriage of Tony Scott action and Quentin Tarantino dialogue in eye-popping 4K.

Initially considered by Tarantino as the potential follow-up to his breakthrough Reservoir Dogs (1992), the filmmaker lost interest in favor of developing what would become Pulp Fiction (1994). His screenplay found its way to director Tony Scott, just off The Last Boy Scout (1991), who brought it to the screen with a cast which, twenty years later, can be hard to comprehend were all in one film together. Christian Slater and Patricia Arquette are the primary stars, but they’re surrounded by an ensemble that includes Dennis Hopper, Gary Oldman, Christopher Walken, Brad Pitt, Val Kilmer, James Gandolfini, Chris Penn, Tom Sizemore, Bronson Pinchot, and Michael Rappaport, and brief appearances from Samuel L. Jackson, Ed Lauter, Conchata Ferrell, Kevin Corrigan, and Paul Ben-Victor. It’s one of those rare movies where the names remain recognizable for several minutes into the opening credits sequence.

In True Romance, two lovebirds marry in a whirlwind romance, but find themselves on the run from the mob just hours into their honeymoon. Clarence (Slater) had been a lonely comic shop clerk, unlucky in love mostly because he’s more interested in talking about Sonny Chiba movies than making any real connection with his dates. Alabama (Arquette) was a call girl secretly hired for Clarence as a birthday present, who quickly falls for her client. What she doesn’t know about her new love is that Clarence is more than a little unhinged: he’s occasionally visited by the specter of Elvis Presley, who encourages him to do dangerous things. It’s okay that he’s not okay, though, because Alabama’s a little nutty, too. After Clarence confronts Alabama’s abusive pimp—played by a creepy, scene-stealing Gary Oldman—and accidentally walks out with a suitcase full of cocaine, they’re unwittingly pursued by a gang of mafia enforcers as they try to unload the drugs for cash on the West Coast.

True Romance is a violent, vulgar movie—unsurprising considering the writer. It’s not among his best scripts, musing too long over pop culture observations and wielding racial epithets in ways that are QT’s hardest-to-defend clichés. Still, third-tier Tarantino dialogue is fifty times better than that of other writers who tried to copy his style for the many crime comedies that came out over the next 15 years after Pulp Fiction. The crew of gifted actors bring stylized language to life and clearly relish their lines, which leads to some very memorable scenes and characters, including a square-off between Oldman’s previously mentioned pimp and Slater, a stoned-out-of-his-gourd Brad Pitt, and a nerve-wracking interrogation scene between Walken and a cool-headed Hopper that plays like a precursor to Christoph Waltz’s most famous scene in Inglorious Basterds.

Being a Tony Scott production, True Romance obviously looks slick as hell. From the bleak, cold-looking opening scenes in Detroit to the warm, sunny streets of Los Angeles, it’s a handsome movie, and looks excellent in 4K high definition. (Alabama’s over-the-top colorful outfits really pop with the HDR treatment; her metallic sunglasses look like they’ll cast a reflection beyond the screen in every one of her close-ups.) Blood is redder here, Clarence’s convertible is more purple, Alabama’s blouse is more robin’s egg blue – the movie appears far more colorful this time around versus prior viewings on other formats. Things like the shootout that ends with burst pillows raining feathers around a hotel room are more crisp; it’s a scene that’s far more beautiful when you can make out the individual feathers, and they’re not just creating a white blur that obscures the action.

True Romance has been released in special editions before, but Arrow’s new 4K finally feels like a definitive one. There are piles and piles of materials ported over from old releases, including deleted scenes and the bummer original ending—with intros from both Tarantino and Scott—as well as separate, full-length commentaries by the director, screenwriter, stars, and critic Tim Lucas. (Pitt, Hopper, Kilmer, and Rappaport also provide scene-specific commentaries from previous discs, which come along with similar, newly-recorded ones by Pinchot and Saul Rubinek.) Other archival features include a vintage EPK, trailers, commercials, and an image gallery; new featurettes are interviews with the editor, costume designer, composers, and Scott biographer Larry Taylor. Those who spring for the upgraded limited edition in time will also receive a thick booklet full of essays, Maxim magazine’s oral history of the movie, and Edgar Wright’s eulogy for the director, as well as a poster, postcard-sized lobby card reproductions, and more. It’s a crazy amount of goodies, all housed in a beautiful, heavy-duty slipcase. Even if True Romance isn’t your favorite Scott or Tarantino movie, this home video presentation is an absolutely lovely piece of physical media, and would make a nice addition to most collections.