“If You Wish Upon Me” returns this week with a tear-jerking pair of episodes and the arrival of an all-too-unwelcome guest. Yoon Gyeo Re (Ji Chang Wook) has finally begun to settle into his new life, make friends, and do what he never thought possible: imagine a future for himself that’s worth living. But old enemies continue to watch and wait, and it’s finally time for the past to catch up.

Here’s what was the most heartbreaking in this week’s episodes!

Warning: spoilers for episodes 7-8 below. 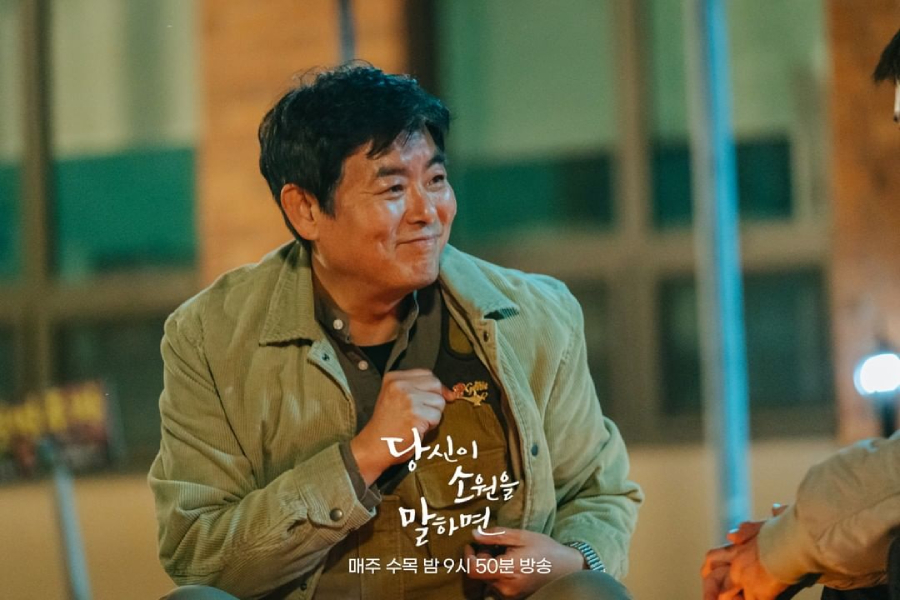 Last week revealed that Kang Tae Shik (Sung Dong Il) is dying, and the show didn’t wait too long to let that secret out. As Gyeo Re’s community service comes to an end, he “debates” on whether he should go or stay. Team Genie knows full well that he intends to stay and that he’s just playing hard to get. But Kang Tae Shik sees through to Gyeo Re’s deeper concerns: should he really tie himself to one place when there’s so much that could go wrong? Gyeo Re’s been burned so badly by people who supposedly cared about him that he’s reluctant to forge ties only to have them broken. So Tae Shik tells Gyeo Re how he came to the hospice in the first place. It’s a story not too dissimilar from Gyeo Re’s, including that Tae Shik was trying to end his life. Only, he failed because Seo Yeon Joo (Sooyoung) and the others at the hospice happened to see him dive off the bridge and rescued him. They took care of him and gave him a new lease on life, and he was determined to return, and so he did as a member of Team Genie. Only he doesn’t have much time left now. Gyeo Re looks heartbroken at the realization and struggles to come to terms with it. 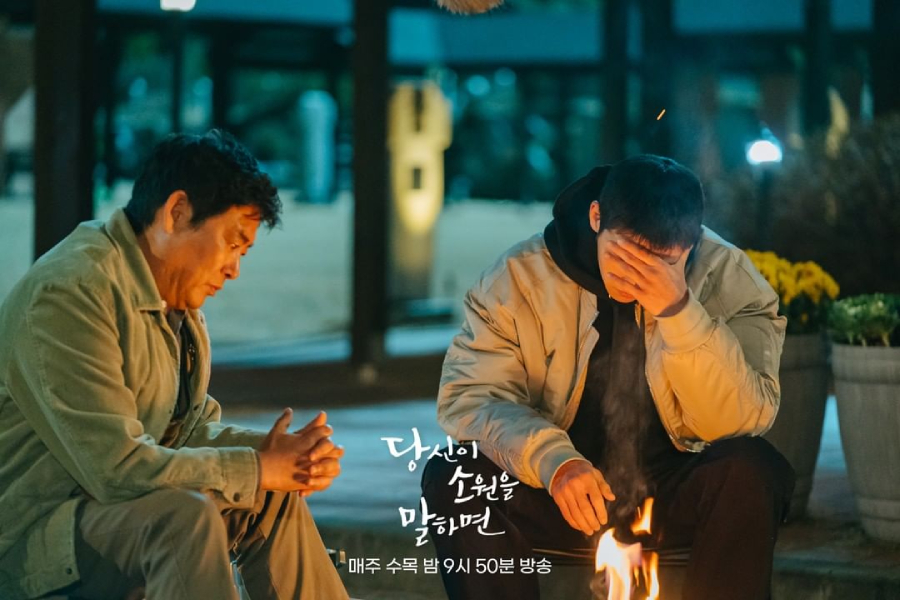 And he isn’t the only one. Yeon Joo happens to overhear everything and fights back tears. With Tae Shik’s birthday coming up, they throw him a party, but only the three of them realize just how meaningful this occasion is. Tae Shik silently cries afterwards, remembering how he used to live, neglecting his wife and son in favor of earning money. He just regrets it all now and wishes he’d done it all differently. It isn’t clear what happened to his wife and son, but Tae Shik remains incredibly protective of Gyeo Re, going so far as to tell off the patient who asked Gyeo Re to end his life when even Gyeo Re had forgiven him. We can only hope we aren’t set up for more pain with Tae Shik and Gyeo Re’s father-son mentorship because things just aren’t going well in Gyeo Re’s life at the moment.

Sonny’s had a good run, but it has sadly come to an end. Gyeo Re doesn’t react well to the news that Sonny is on his last hours. We see just how the two met with Sonny having been abandoned by his owners. They were vloggers who used the dog as channel bait and tossed him on the side of the road where he lived as a stray. Sonny met Gyeo Re when they were both at low points in life, and Gyeo Re has loved him ever since. And that means that he can’t just let the dog-abandoning vloggers get away with it. With Yoo Seo Jin’s (Jeon Chae Eun’s) help, he finds the vlogger couple (who are in the process of getting two more dogs to abuse and discard) and threatens them with violence if they don’t admit to the truth. Naturally, they don’t. And naturally, Gyeo Re takes it out on their car.

It’s a sight to behold as Gyeo Re goes absolutely wild in his anger at the couple and also at the world for taking his best friend from him. It’s only when Yeon Joo and his vet friend intervene, saying that this isn’t what Sonny would want, that Gyeo Re finally leaves the scene after causing severe damage to the couple’s car. In the meantime, Team Genie has done what they do best and prepared a montage of streets and beautiful places in the world for Sonny to see on an outdoor screen. There, Sonny and Gyeo Re watch all the places in the world they never had the chance to see, and Sonny passes on as Gyeo Re sobs (that wasn’t heartbreaking at all, nope, definitely not).

But Team Genie isn’t the only one witnessing this. In the background, Ha Jun Kyung (Won Ji An) lurks unseen, and the look on her face spells trouble.

Gyeo Re and Yeon Joo are just plain adorable. He runs out into the rain and searches a whole mountain because he thinks she’s lost there (she isn’t), and when he gets sick afterwards, she takes care of him. There has clearly been something brewing between them, and after her confession last week, it’s his move now. But it’s still a surprise when he mumbles that he likes her. Yeon Joo wonders if it’s the medication speaking, especially when he doesn’t bring it up afterwards. But in the weeks after Sonny’s death, he makes an effort to ask after the day to watch over how she’s doing. And while cleaning up, he mumbles that they should go on a date and nearly gives Yeon Joo a heart attack. 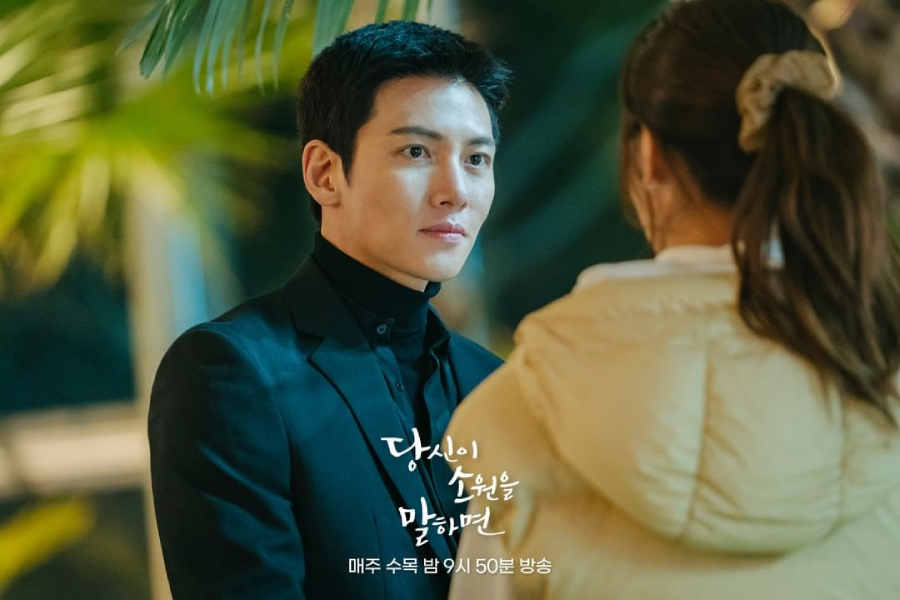 Turns out that he remembers the confession 100 percent but was waiting for her response. She’s more than okay with it, but Gyeo Re makes the mistake of letting her pick the date location and activity. The next thing he knows, he’s learning to perform CPR, volunteering at a dog shelter, and rock climbing, all while dressed all fancy. Poor guy, he just wanted to have coffee and a movie. Both are no longer options by the time the day ends, but as they argue over who seduced who first, Gyeo Re awkwardly swoops in, and we get a pretty adorable kiss, which Yeon Joo immediately reciprocates.

This should be cuter than puppies (and it is), but what makes this so heartbreaking is that Gyeo Re is so happy, and it’s this very night that his world shatters. When he returns to the hospice, he finds none other than Jun Kyung waiting for him, calling herself his girlfriend. And just like that, all hope of happiness flees his eyes.

We’ve seen a lot of Jun Kyung, but we still don’t know of what makes her tick. She doesn’t seem to care about her life or anyone else’s as long as she gets what she wants: Gyeo Re. The scary thing about her is that she knows that Gyeo Re wants nothing to do with her. The second Gyeo Re spots her, he flashes back to a heartbreaking sequence where he begs her to leave him alone and to stop threatening to end her life if he leaves. He cries that he isn’t happy, that what they’re doing isn’t living, and he just want to be free of her. She’s vicious, spitting out that he’ll just have to learn to be happy with her because that’s what family does. They stay by each other’s side through thick and thin no matter how much they hate each other. This girl has a very warped view of what constitutes family.

It also isn’t clear just what role she wants Gyeo Re to play in her life. She keeps calling him her family but tells Yeom Soo Ja (Yang Hee Kyung) at the hospice that she’s his girlfriend. It’s just creepy at this point. Even worse, the last time she saw Gyeo Re, she threatened that if she ever found him being happy without her, she’d end both their lives. Yikes, this girl is nuts. There’s also the question of why Jun Kyung waited until she was provoked by the gangsters hunting Gyeo Re in order to go seek him out. She knew where he was but said nothing for quite some time until she found that they’d tracked him down via the video of him destroying the vlogger couple’s car.

Either way, her arrival spells doom for Yeon Joo and Gyeo Re’s relationship. The episode preview for next week shows Gyeo Re leaving Yeon Joo then and there, likely in a misguided attempt at protecting his newfound family from the menaces of his past. Worse, it looks like Yeon Joo withdraws as well. It looks like things are about to get a lot harder before they get better. But hopefully it’s a storm that’ll be weathered quickly because Gyeo Re is no longer as alone as he used to be, and his new family won’t just sit still and let his world collapse again.

Check out the drama below!

What did you think of this week’s episodes? Let us know your thoughts in the comments below!

Shalini_A is a long time Asian-drama addict. When not watching dramas, she works as a lawyer, fangirls over Ji Sung, and attempts to write the greatest fantasy romance of all time. Follow her on Twitter and Instagram, and feel free to ask her anything!

Currently Watching:  “Adamas,” “Alchemy of Souls,” “Big Mouth,” “If You Wish Upon Me,” and “Little Women.”
Looking Forward to: “Island,” “Chaebol’s Youngest Son,” “Queen of the Scene,” “Blind,” “One Dollar Lawyer,” and “Black Knight.”